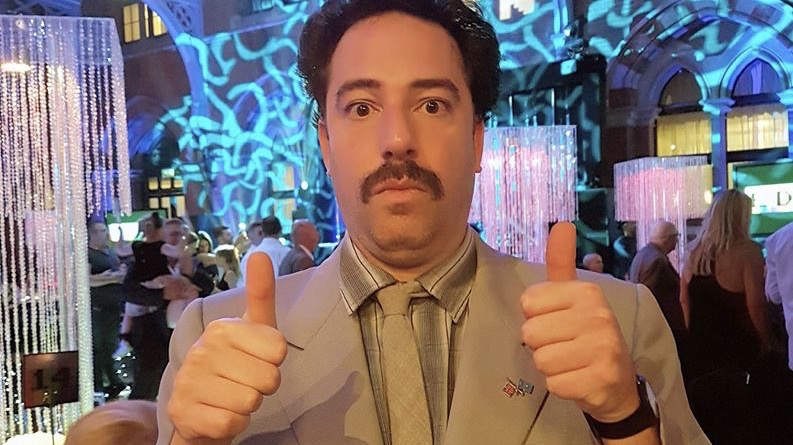 It seems another potentially catastrophic epidemic is on the horizon, as the Centers for Disease Control and Prevention have reported a significant number of Borat impressions happening throughout the United States.

“On average, we typically see anywhere from 200 to 300 Borat impressions reported each month,” says Colin Brown, communications director with the CDC. “We usually expect a small increase whenever we’re close to Halloween, or anytime Pamela Anderson appears in the news. But over the past two weeks, we’ve had approximately 25,000 cases reported across the country.”

With the release of Borat Subsequent Moviefilm back in late October, experts said they expected a larger-than-usual spike in impressions. The numbers, however, have eclipsed even the direst projections.

“Honestly, we assumed most people were just kind of over it,” continues Brown, “But apparently racist voices, Antisemitism and jokes about prostitutes continue to resonate with the general public in 2020.”

This isn’t the first time the CDC has been caught off guard by Sacha Baron Cohen’s highly contagious and rage-inducing impressions. In 2006, the CDC put a 60-day moratorium on weddings as a result of the first film’s release.

“Women were becoming traumatized because every wedding toast included a painfully bad, ‘My wiiiife!’ mention,” recalls Brown. “Furthermore, everyone from groomsmen to family members were continuously saying, ‘Very nice. How much?’ at such a rate that we couldn’t stop the spread.”

The newest strain of Borat impressions has been exasperated by the recent Presidential election, with an alarming number of terrible white guys yelling “Michael Penis!” anytime Vice President Mike Pence appears on television. Most concerning, however, has been the revitalized use of Borat’s signature rape jokes from the original film, which even Cohen realized were not ok by today’s standards and left out of the sequel.

“Earlier this week one of our interns was leaving the office and told me, ‘Not too much raping…humans only!’ I was shocked about his flippant attitude about sexual assault, but far more troubled by the fact that that wasn’t even one of the top five lines from the original Borat,” says Brown.

Contract tracers are currently working with CDC officials to identify Borat impression hotspots, but have had trouble containing individuals due to the unpredictable nature of the impressions.

“We figured it would be all guys in their late-30s and early-40s, who would thought the original movie was funny 14 years ago,” explains Brown. “The problem is that these guys have no sense of social cues. They’ll say ‘Wawaweewa’ at a woman trying to enjoy a day at the apple orchard with her children, scream ‘hi-five!’ and attempt to touch confused teens at the mall, and announce they are the ‘king of the castle, king of the castle’ when sitting down essentially anywhere.”

Brown says they hope to see cases drop as we enter the winter months, but fear a second wave this summer, when guys ironically wear the neon green one piece thong swimsuits.